One of my favorite blog posts ever was Caleb Crain's search a couple years ago -- after mockingly telling his boyfriend that he was going "Mad, mad I tell you!" -- to find the origin of that phrase.

Anyway, the phrase seems to have come from Within an Inch of His Life, a melodrama by James A. Herne first staged in 1879. I hope it won't disappoint anyone too grievously if I confess that I was able to resist reading the thing through. Here's the money shot:

Jules de Dardeville. You wanted to be free that you might prevent me from breaking the chains in which you held me. At our last meeting, when I thought you were crushed by grief, and was softened by your hypocritical tears---your anger, which I mistook for love---I was weak enough to say "I marry Dionysia only because you are not free." Then you cried "Oh, God! How lucky it is that thought never entered my brain before!" What thought? Come! Answer me! Confess!

Genevieve, Countess de Clairnot. I was mad---mad---I tell you, with jealousy and anger! I have outraged and destroyed my husband's honor! But to murder him! Bah! You accuse me of what you know to be a lie!

I fear that I will never be able to top Caleb's quote -- which, it should be noted, gloriously possesses both a "mad" and a "Bah!" -- but this morning I pushed madness all the way back to the antebellum era.

For a moment Mrs. Lorraine made no reply -- then she said:

"You call her my daughter's child! I had no daughter, Amy, she was a serpent that stung the breast which nourished her -- and he -- he! Amy, I shall go mad -- mad I tell you, if you don't take that child from my sight!"

There are also, it turns out, some surviving oil portraits of our newly crowned inventor of Mad--Mad!.... 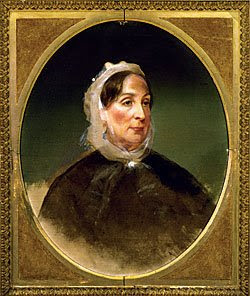