The Lightning That Failed

In the latest issue of New Scientist I have an article on the now-obscure 19th century "lightning calculator" Zerah Colburn:

Zerah Colburn was not exactly the reigning intellect of Cabot, Vermont. Still only five years old, and with just six weeks' schooling, he had not yet learned to read either letters or numbers. Left to amuse himself in his father's carpentry workshop one day in August 1810, he was playing among the wood shavings when his father Abia heard a most unexpected childish prattle. "5 times 7 are 35," Zerah muttered to himself. "6 times 8 are 48." Zerah continued to run through multiplication tables while his father listened in astonishment. What, Abia finally asked the child, was 13 times 97? "1261," the boy answered without hesitation....

His father -- the original stage-dad -- abandoned the rest of the family to take the boy on a permanent European prodigy/mathematical freak-show tour, where the boy distinguished himself by finding an error in a Fermat number. But with his father's schemes eventually exhausting the patience of patrons like John Quincy Adams, Washington Irving, and Humphry Davy, a teenaged Colburn improbably found himself playing the lead in Richard III in a touring theatrical troupe in Ireland.

It's a strange, strange story, and all the stranger in that decades later Colburn eventually did return to the US -- where his own mother no longer even recognized him -- and actually did write a memoir in 1833, long after he'd been ignored by the public. To my knowledge, the self-published Memoir of Zerah Colburn is the first memoir ever written by a child act -- or by a math prodigy, for that matter. It's been out of print ever since. 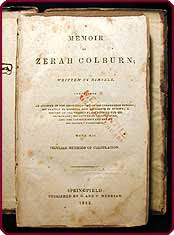