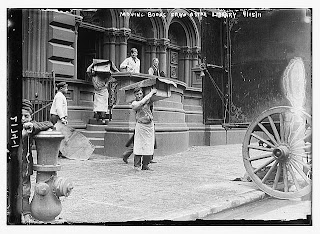 Weekend Stubble's finally getting a shave: a new website (including all my radio shows and links to over 100 of my articles) at literarydetective.com ....
...a new blog (complete with all the old Stubble posts) at literarydetective.blogspot.com ...
...and my twitter feed: twitter.com/thelitdetective .
Go forth and click!
# posted by Paul Collins @ 2:56 PM

The Napoleon of Not a Clue

Ladies and gentlemen, I give you the most incoherent book title of 1907! 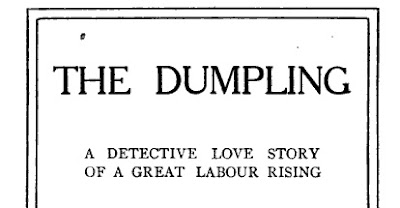 Think they're joking about a detective love-story starring a delusional Napoleon reincarnation? Well, here's the frontispiece: 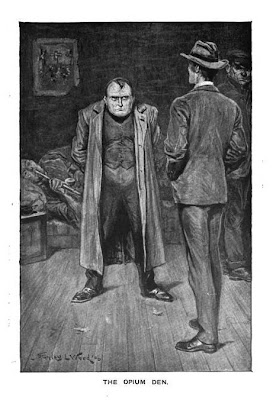 Come to Think of It, My Scalp IS Tingling... 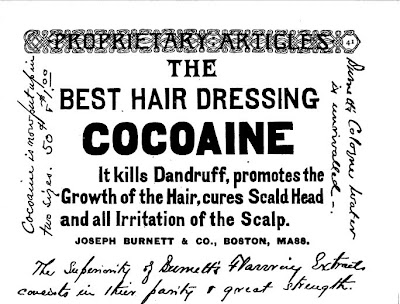 Do We Get Jetpacks This Time?

A New Scientist Histories column from '05 noted that the last really huge volcanic eruption led to the invention of the bicycle:

ON 5 April 1815, Mount Tambora in Indonesia began to grumble. A week later the volcano blew its top in a spectacular eruption that went on until July. It was the biggest eruption in recorded history, killing around 92,000 people and ejecting so much ash into the atmosphere that average global temperatures dipped by 3 °C. In the northern hemisphere 1816 became known as the year without a summer. New England had blizzards in July and crops failed. Europe was hit just as badly.

On holiday by Lake Geneva the 18-year-old Mary Shelley and her husband Percy were trapped in Lord Byron's house by constant rain. To divert his guests Byron suggested a competition to write a ghost story. The result was Mary Shelley's Frankenstein. Across the border in the German state of Baden the soaring price of oats prompted the 32-year-old Karl Drais to invent a replacement for the horse - the first bicycle.... 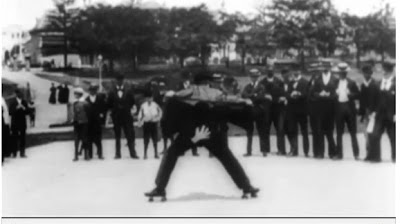 There's no way to embed it here, alas, but the Times of London has video of the newly discovered 1896 film that appears to be Australia's first movie:

Patineur Grotesque shows a bearded man, dressed in a top hat and smoking a cigar, rollerskating in a park before a circle of onlookers. He stops and lifts his jacket to reveal a white hand print on the bottom of his trousers in a cheeky gesture to the camera."

How To Do Nothing With Nobody All Alone By Yourself 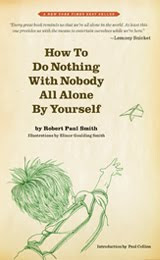 ...is the most awesome title ever for a book, and Tin House Books now has Robert Paul Smith's long-lost 1958 masterpiece reissued complete with a blurb from Lemony Snicket and an intro by yours truly.

TH editors got intrigued by it after I wrote a "Lost and Found" piece for them about the book for their "Off The Grid" issue a couple years ago:

I don't know about you, but I wasted all but about fifteen minutes of my childhood. Those fifteen minutes were spent on a beach in Cornwall busting a nodule of quartz out of a fist-sized chunk of flint; thirty years later, I still have it somewhere in my office, in an old coffee can. Everything else I made during those years—the swords nailed together from old pickets, the forest forts that defended nothing from nobody, the poorly assembled Revell model cars with Testor's paint smeared lazily on them, the Sherman tanks drawn in near-medieval 2D perspective—they're all pretty much gone now.

Come to think of it, I haven't used the piece of quartz for much either.

But if I want reminding of where the rest of that time went, I have this book. A step-by-step guide to grinding oyster shells against the front stoop for no reason, to turning buttons and string into buzzsaws that won't cut anything, and to making paper boomerangs that don't come back, How to Do Nothing With Nobody All Alone By Yourself is about what you do when you're a kid and have neither money nor anyone paying much attention to you, and where your one guiding principle is that you avoid grown-ups and don't ask for help...

The Times calls it "definitely the wildest how-to manual I've seen this year" -- maybe because of, ahem, the sections on how to use a penknife and an icepick -- and Tin House now also has a terrific find up a Youtube: a ten minute interview with Robert and Elinor Smith by Edward R. Murrow.

Chess for the Insane

What got me started this week on my whole Victorian board game kick -- or, I should say, my latest one -- was a passing mention in this ad of Hexagonia, put out by Jaques & Son of London: 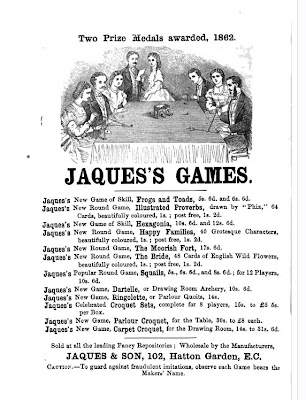 (Jaques is still very much around, by the way.)

Hexagonia was, apparently, the first commercially manufactured hexagonal chess game. (At left is a modern hex set from chessvariants.com.)
I haven't been able to find a picture of one of these Hexagonia sets yet, but there's an intriguing description of the game from Routledge's Every Boy's Annual for 1866: 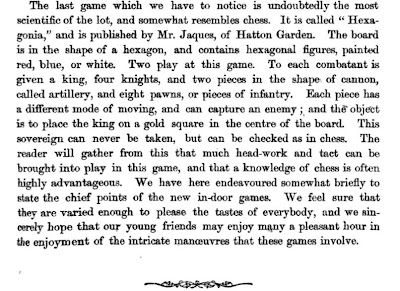 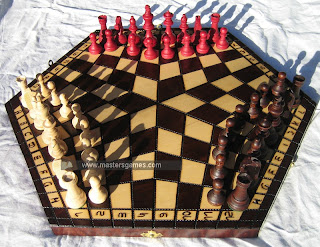